Round two of an intriguing High Stakes Duel is set to resume on May 5th. The clash between poker heavyweights Phil Hellmuth and Daniel Negreanu provides the Canadian with a chance to draw level. The hotly anticipated event is set to be streamed on PokerGO. But what is the story so far? 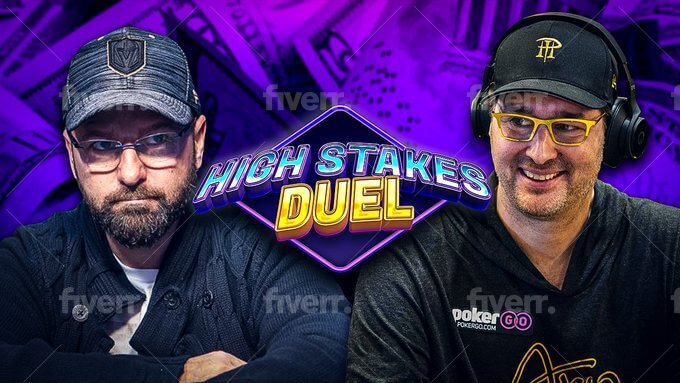 In the opening round of High Stakes Duel II, 15-times World Series of Poker champion Phil Hellmuth staged a miraculous comeback to stun his opponent. Having been pretty much down to the felt with a 19 to 1 chip disadvantage, Hellmuth managed first to grind his way back into the game, before completing the turnaround.

The rules of round one were the same as when Hellmuth took on Antonio Esfandiari back in 2020. Both players bring $50,000 to the table in the PokerGO studios. The game is No Limit Texas Hold'em, starting at $100/$200 blinds, and play will continue until either player is stacked. The losing player gets the option of whether to play again, but the stakes will double each time.

Having been in complete control at one point, Daniel Negreanu was understandably aggrieved at having lost out, opting to continue playing. Round one of this High Stakes Duel turned into a six hour poker marathon, and the rematch is set to be another thriller.

Although we had to wait a little over a month, the latest $100,000 event is now ready to kick off. Let the fireworks commence.

Daniel Negreanu recently lost over a million dollars in a 25,000 hand poker marathon against Doug Polk. Hellmuth criticised elements of Negreanu's play during that contest, which the six-times WSOP bracelet winner didn't like.

In response, he challenged Hellmuth to a contest, stating, "I’ll play you a heads up match live, online, at any stakes you feel comfortable with for as many hands as you would like". He even called out the 1989 WSOP Main Event champions as "bad" player.

Most of the trash talking ahead of High Stakes Duel II has come from the Canadian, rather than Hellmuth. "My prediction for the match is it's gonna be very frustrating for Phil. I don't see much of a chance for him winning", Negreanu stated ahead of the opening round.

In contrast, Hellmuth has been quite respectful of his fellow poker giant. He has frequently referred to him as one of best to ever play poker.

What Should We Expect From High Stakes Duel II?

For some reason, Hellmuth is getting no respect from the bookmakers. Negreanu has been installed as a heavy favourite, despite what must have been a mentally damaging opening round defeat.

The Canadian arguably surrendered his chip lead in the opening contest due to overconfidence. His desire to amuse the PokerGO audience, including offering up a box of tissues to his opponent, may have worked against him. He'll need to take things more seriously this time around, against a fellow legend of the game.

If Hellmuth can remain as patient as he did in the first High Stakes Duel encounter, he has every chance of booking another win. As always with the Poker Brat, his temperament will be key. The contest begins Wednesday May 5th at 8 pm ET.