The Death of Poker In Vegas 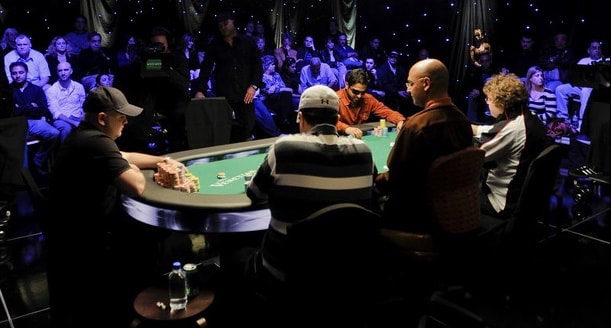 Many of you already know that I lived in Las Vegas for six years. The city will forever have a firm hold on my heart as it is where I lived my dream of being a professional poker player. That is why it pained me to see the announcement that the Nevada Gaming Control Board made this past Friday that all poker tables in the state are to be limited to 4 players maximum once the casinos are reopened. Make no mistake about it, this is the death of poker in Las Vegas, not only as we knew it but in any shape or form. Some may say that this was the path the game was already on and that recent world events only hastened the inevitable. Others will argue that the game can survive this limitation and is only temporary until we are past this period completely. But given the climate that poker was already in prior to the virus, this is a development from which the game cannot survive in Sin City. In fact this will have repercussions the world over that will impact live poker scenes everywhere.

Let us not forget that this is where we were headed already. I have friends that are much younger than I and I always chuckle when they talk about the "glory days" of poker back in 2009 or 2011 or some other period that I would consider to be much too recent. They really have no idea how good the games were back from 2003 to about 2006, just after the poker boom and the Moneymaker effect. I used to joke that I could walk through a Vegas poker room blindfolded and come out with at least $200 and this was not too far from the truth. Every game in town was great from $1-$2 all the way to the nosebleed games at the Mirage then at the Bellagio. When I first arrived in Vegas back in 2005 there were about 50 poker rooms in town. Due to the growing popularity of the game this number would eventually double and the city would house over 100 rooms. But things quickly changed and by the time I left in 2011 many rooms had already closed and currently the number stands around the same 50 mark that I saw when I first arrived. I remember during the end of my tenure the Palms Casino had built a new poker room, adjacent to a new sports book and had spent millions in the process. I played in the room with my friends for a few days and it was quite busy. But I remember wondering to myself if this new room had actually created any new players or were they just recycling the same finite number of players that were in town? The room was closed inside of 1 year.

I imagine there will be many rooms that will try and move forward with this new restriction and play on with only 4 players per table. Let us keep in mind that the norm for online poker has become 6-max and now the live rooms of Vegas will attempt to move forward with fewer players. There are so many reasons why this could never work that I could hardly contain it in one paragraph. First there is the issue of rake as we remember that Vegas poker rooms typically offer a discount in rake when a 9 or 10 handed tables gets down to 5 players, sometimes even 6. This is a practice that they can no longer employ as the tables would be in a perpetual state of discount. So either they discount the rake and make even less money than the little that poker rooms already generate, or they have to keep the rake full and essentially make the games unbeatable for most. I say most because for others this will present an exploitable situation. Surely some poker rooms will attempt to continue and run 4 handed games and ultimately some regulars will give it a go as well and attempt to play on. But shorthanded games are not the live room norm and those who are not accustomed to it will surely suffer. As this type of game is an online specialty, there are those who will swoop down on the live games to take advantage of this situation and pick at the carcasses of the players that are left playing on. But even these players may not deem this to be worthwhile given the rake situation I just discussed. And lastly, these short handed games will essentially bring an end to most, if not all, promotions in Vegas poker rooms. The rake situation will already be bad and to try and take more of it in order to fund promotions will be an impossible task. But once again, I imagine that some rooms will try to carry on as if business as usual and still run promotions. Regulars and locals are known to game promotions by standing up and leaving the table as much as possible, to limit their risk and maximize their gain. A full 9 or 10 handed game can shield the rest of the table from this effect somewhat seeing as how there are more players on the table. But in a short handed game this practice will basically bring the table to a halt every few minutes.

And what of casinos outside of Las Vegas? There have already been stories of casinos in other States such as Louisiana installing what are essentially sneeze guards on every gaming table. In this setup, plexiglass shields would be screwed onto every table separating the players from the dealer and the players from one another. This seems to defy the main aspect of live gaming, namely the social one. I have to admit that whether I have lived in Vegas or Cambodia, an essential element as to why I played live poker was to socialize not only with my friends whom I often played with, but also other players on the table that I had never met previously. It would seem odd if I had to sit there on a table and literally be separated from every other human in the room. I would think to myself why I did not just stay home and play online? And what about when I cash out or need a drink; how am I going to be protected in those situations? I applaud the gaming industry in these areas for trying their best as they have the unenviable task of saving thousands of jobs in the casinos. But these efforts seem so impractical when thought out to their natural conclusions that I can hardly see any of them working. Of course there are some parts of the world where poker continues to run and I happen to live in one of them. Here in Phnom Penh and Sihanoukville poker games continue to run in some venues and may appear as attractive destinations for those looking for a game. But many travel restrictions are still in place and without an influx of new tourists into the country, the situation seems barely sustainable at best and certainly not ideal. And desperate times seems to bring out the worst people, especially in the case of poker. There already have been a few incidents of scammers in the poker community here in Phnom Penh in recent months and such cases seem even more magnified when the playing field is limited as it is now during this pandemic. I have to admit that I have played live poker a handful of times recently and when I look around I see a bunch of unfamiliar faces. With no new tourists coming in, I always wonder to myself just exactly who are these people?

So what will poker look like moving on and what will become of this great game? Online poker will certainly continue to be a thing and will most likely continue to boom until this period of time is over. Being an agent for online poker clubs myself I can say that there has been an uptick in the amount of players jumping online and the games have greatly improved because of this influx. But this growth will also have its limits as poker in general, and the online version especially, depends on disposable income. With most of the world in lock down and people not able to work, extra money to play poker with will become scarce. And I previously wrote on my belief that live and online poker depend on each other for their respective growth in the industry. With the live scene suffering as much as it is currently, this will certainly have an effect on its online sibling. The challenge of all this will of course be to find new players and not just recycling the old ones, something that was already difficult enough prior to the pandemic. Those of us involved in the poker industry have a great responsibility going forward not only in helping the game grow, but also in maintaining the integrity of the game in a time where those that would take advantage are many. To the live players reading this article I would advise them that the transition to online poker is one that has to be made. Of course I have some self interest in making this point, but it also happens to be the truth. The days of game selection are over when it comes to live poker as choices will be limited, and in the case of Las Vegas perhaps an end to things altogether.

As I stated in the opening paragraph of this article, Las Vegas holds a special place in my heart as a poker player. It is forever for myself and many others still Rome in the center of the poker universe. But going forward the scene will look drastically different as the focus of this universe will shift elsewhere. More than ever players will seek games in other parts of the country and the world at large. But with so much of the world still choosing, and in some cases forced, to stay home players will often find themselves just playing each other. While not ideal the game will continue to run and perhaps even thrive in the online arena. I hope for a day when live poker can return to its previous state, but for now and for better or worse the game will carry on in the virtual world.