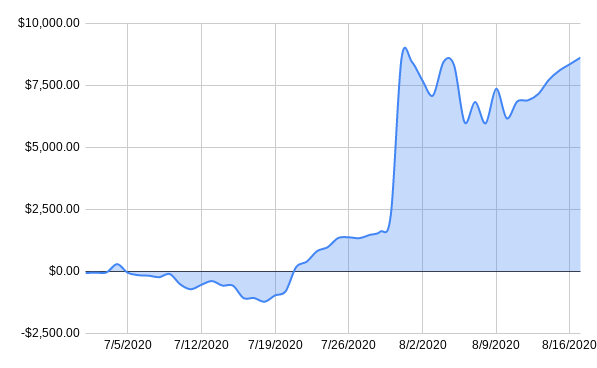 The last time I have played a significant amount of hands in no limit hold'em was about 1 year ago when I was a house player for the WM Casino in Sihanoukville. Except for this stint, I have consistently been an omaha player when playing online for the past year. And while I do have over 100K hands in this game thus far, I have yet to experience the game live for any extended amount of time. Having been involved with the Triple Seven Club here in Phnom Penh for the past 1.5 months, this has given me an opportunity to test my PLO skills in a live setting as for the moment it is an all omaha room. While the overall results are very positive, the variance has certainly been greater than any of my hold'em charts would show. There were some adjustments that needed to be made but the results thus far have been positive and one that I hope to continue moving forward.

I should first mention that the minimum buy in for the $2-$5 PLO game at the Triple Seven is only $200. I buy in for this amount as nearly everyone else does the same when the game opens daily at 2:00 PM. One might initially think that the game might play tight given these circumstances, but it is quite the contrary. It actually reminds me of a $5-$10 NLH game they used to have in the state of Florida when the laws there dictated that the maximum buy in can be only $100. It was always a frenzied and frenetic game in the beginning of each day as everyone tried to build up a stack. After a couple of hours a few players would have a proper stack and then the "actual" game would begin. The PLO game here is quite similar in that everyone tries to double or triple up in the first couple of hours with their $200 stack. Then when the big whales show up a few hours in they can play back at them with a proper stack. It is an ideal spot to pick up $200-$300 easily as players pot and go all in very light.

But it certainly did not start that way as I had difficulty adjusting to this short stack strategy early on. In fact by looking at the provided spreadsheet one can see that I lost in 11 of my first 17 sessions. I was playing a very odd tight-passive style in which I was so conscious of my small stack that I was fearful of raising or going all in. Instead I would call everything down and every time I missed the flop I would bleed off $25 each time. Before I knew it I was staring down at a $100 stack and I would go all in light or have to rebuy to top back up to $200. I started to buy in deeper as an attempt to adjust but that did not seem to make much sense in that no one else was and to be quite honest I felt even less comfortable risking more with a bigger stack. 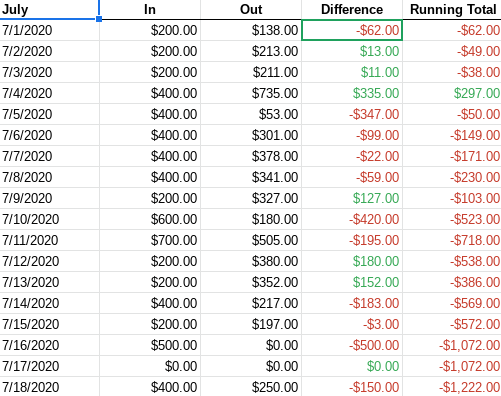 I quickly returned to a short stack strategy and eventually started to feel more comfortable. The game became much simpler at this point as I realized that in most situations where I was involved in a pot, the stack to pot size ratio usually dictated that all of my chips had to get in the pot. I started to be more selective in my preflop hand selection and began to execute bluffs and squeezes to give myself the best pot odds. I would go on to win in the next 11 out of 12 sessions, when I would have what is easily my best live single night's result.

There is a Chinese boss who plays in our game about twice per week and when I say "boss", I really do mean it as he is the boss of everything. He usually does not play long, maybe for a couple of hours on his most active nights, but punts at an unbelievable rate. It is a common occurrence in which he will play for only 1 hour and still lose $10K+. Of course I never get to play in this particular lineup with him as I have to give up my seat for a customer and no one else dare leave when the boss is on the table. But on this night a seat became available in the most unusual way. Another Chinese boss was playing on the table but he had a quick meeting to attend and asked that his chips be left on the table. But as we did not want any waiting players fighting or arguing over what appeared to be an open seat, I was asked to go into the game and occupy the seat until this boss returned. He never did return and I ended up playing with the big boss for over 2 hours. I had already turned my $200 buy in into $1,000 earlier but had sat out when the game got full. So when I re-entered the game with the big boss I did not want to risk my entire stack and thus I bought in only for $300. I was down to about $250 when I decided to limp in with a hand of KQT9 double suited. Normally I would raise with this hand but the general strategy when the boss is on the table is to let him do the initial raise then see what everyone else does or perhaps put in a re-raise in order to isolate. As fortune would have it, the latter scenario is exactly what happened in this hand as he potted to which most players were comfortable calling. But when I re-pot shoved, the boss then raised again to $1K and got everyone else out. He did me a huge favor as I was able to take the hand down heads up with a single pair of Kings. I would have two more big hands with the boss, one in which I flopped top set and then rivered the nuts with a straight and another in which my aces full of kings bested his kings full of aces. When it was all said and done I looked down upon a stack of $6,450, all of which was built from my initial buy in of $200. 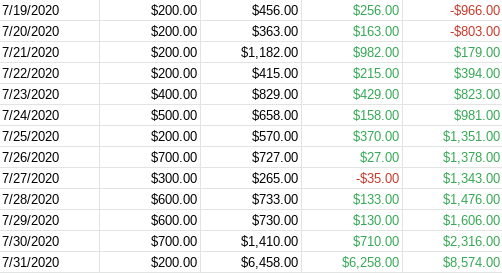 I am not sure if variance kicked back in over the next few days or perhaps I played badly, but I went on to lose in the next 7 out of 10 days including one in which I dropped $2,300. I remember this particular session well as it was one of those nights in which I lost every flip and got out drawn on every flop. Buying in for only $200 it is easy to get into multiple all in situations and while buying in for the minimum grants many opportunities to double or triple up, other nights can be nightmarish as your AAxx or KKxx gets outdrawn by multiple players seeking to hit their second pair or chase whatever draw they may be seeking.

But things can turn around for the better just as quickly as I then went on to win the next 7 days in a row which enabled me to finish the week up $2,451.

Overall I am up $8,626.00 over the past 1.5 months but it can be difficult to ascertain just how well I am doing given my results. On the one hand being up this much in the amount of time I have played should be a reason to remain positive regarding the direction of the game. While I have not tracked the number of hours I have played during this time, given the nature of each day and how my sessions are mostly similar in terms of time I can surmise that I have played 250 hours in these past 1.5 months.

I suppose there are several ways of looking at this. One is to just look at the results straight forward and conclude that winning $172 per day and $34 per hour are all good results. But looking at the results closer one might point out that 75% of my winnings came on one session while the other ones provide a more ambiguous conclusion. While this may be true I have decided to approach my results from a different perspective. As I technically work for the room I am not allowed to keep my seat when the game fills up and players are waiting. This means that I play at the start of the game and also at the end when players start dropping out, but hardly ever in the middle when the games are best and multiple action players are sitting on huge stacks. I do not think it would be unreasonable to conclude that if I were given the opportunity to play during these parts of the game that my results would at least be comparable to my current numbers, if not better. In fact the one time I was given a chance to play in the best game when the boss showed up, I had my best day ever in a live poker game.

This is more live poker than I have played in a long time. I still play online but not as much as playing live has taken up a good portion of my available time. But as long as my online win rate and totals do not suffer too much I will continue to do both as I need to win and save as much money as possible. I have two young daughters and I have to put the oldest in school next year. It is rather ironic as I am quite active in the nightlife here in Phnom Penh, but my main goal in life at this point is to make sure that neither of my daughters ever see the inside of a hostess bar in their lifetime. I just turned 46 years old a couple of months ago and while that is not necessarily old, I have come to realize that there is a chance that I will be around for the adult years of my daughters' lives. That being said I have to do as much as I can now to ensure that they have a good future. For that I am grateful that online games are still good and that I found this $2-$5 omaha game.