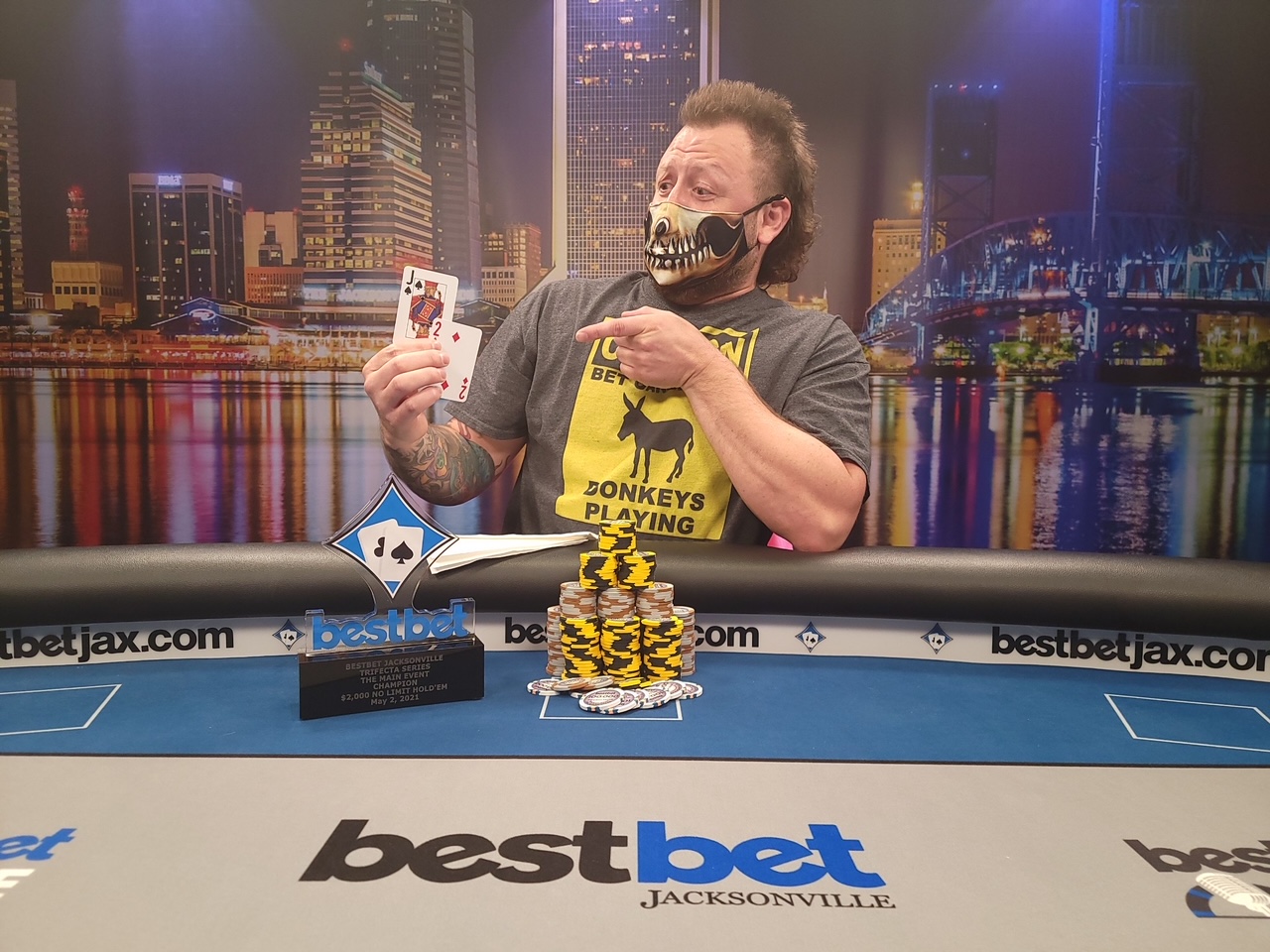 The popular $2,000 main event of the Jacksonville Trifecta Series has always been big. After months of speculation about the possible return date, the tournament was held from April 30 to May 2. It was quite an attraction for players too, with 146 players signing up for the $2,000 tournament. It was a tough challenge for everyone involved, with Kelly Joe Andrews taking the title home.

Andrews won a total of $64,067 for his win, which is the second biggest claim of his career. He now has almost $300,000 behind his name in poker winnings. At the same time, Andrews also scored nice points for the Card Player Player of the Year award after winning the Trifecta entry, cementing his place as one of the best players to come out of South Carolina.

Heated Action at the Table

Kelly Joe Andrews fought off a field of 146 entrants on his way to the title. He wasn’t in the lead by the time the final eight at the table have been set. Rishi Srivastava was the leader at that point, with Andrews breathing down his neck. However, it didn’t take long for the eventual champ to turn up the heat. He took the lead with a nut flush against Srivastava’s top pair, top kicker, and never looked back.

Srivastava managed to regain some of the lost chips against Rafael Adame, with Jeffrey Trudeau eliminating Michael Scoma. In the next round, Trudeau was outsmarted by Andrews. Srivastava’s run ended when he got all-in on a preflop with pocket 7s which were called by Kelly Joe Andrews. In the end, Srivastava earned a solid $16,352 in the $2,000 main event.

Trudeau continued his good run of form by defeating Geoffrey Blum to take the lead. Blum ended up fourth. The three final players were Trudeau, Andrews, and Petiote who was on the shortest stack.

He was knocked out by Trudeau with a winning flush, who held a rough 4:3 chip lead over Andrews. When everyone thought that former WSOP gold bracelet winner Trudeau would take home the title, Andrews raised to 70,000 from the button. This was followed with a three-bet of 225,000 by Trudeau, which Andrews called. The flop came down with Andrews calling Trudeau’s bottom pair.

He managed to improved his hand to jacks up when Trudeau checked. Andrews went all in which was called by Trudeau for 795,000. Andrews won the tournament with two-pair, leaving Trudeau with $42,711 in second place.

Player of the Year

By winning the $2,000 Trifecta Series Main Event, Andrews scored a total of 288 POY points. This helped him move up to 376th place in the overall standings. This was Andrews’ second-biggest win of his career after the third-place finisher at the 2015 WSOP Cherokee main event.

He’s surely a player to keep an eye on. Fans of the Trifecta Series won’t have to wait for long for the tournament to return. The Bestbet Jacksonville tournament is coming up later this year, with 11 events scheduled to run between June 17 and 28.